The Lambert ranch got its start in Hereford cattle in 1974 when Stu and Marie Lambert bought a Hereford steer for their son, Steve. Little did they know that it would become a life shaping purchase. From that purchase the Creekside Ranch in Sonoma, CA, came into existence and the Lambert family became well known for their high quality Polled Herefords for many years. In 2001 Steve Lambert purchased the very top end of that herd after the death of Stu and the Lambert Ranch found a home in Oroville, CA. Steve had attended Chico State University right down the road and found that the ag infused area was a great place to pursue his passion of raising cattle.

Starting out as a predominantly polled Hereford operation, Steve has successfully taken those great genetics and combined them with Horned Herefords to produce quality females and bulls that appeal to both sides of the Hereford cowman. Steve does extensive work with AI which allows us to keep up with current bulls and to always work on EPD’s and carcass quality. With ranches now located in Alturas, Butte Valley and Oroville we are able to produce bulls with the commercial rancher in mind that can adapt and perform in most terrains. Maintaining both a fall and spring calving herd allows us to sell bulls as private treaty year round. Every fall we sell the majority of our bulls in our Butte Bull Sale located at the Oroville ranch. We also have a Modoc Bull Sale in Alturas in February. We have been attending the Red Bluff Bull and Gelding Sale for the last 35 years with great success. They host up to 400 bulls every January in what is the best cattle event in the West.

The Lambert ranch has diversified over the years and is now home to walnut trees, grain hay and, on occasion, watermelons.

Steve has always been active in his community. As the past Mayor of Paradise, he is now in his third term as a Butte County Supervisor in which he is the Chair of the Board. He is active in the Cattleman’s association, Farm Bureau and the past President of the American Hereford Assn. in Kansas City. Clayton is following in Steve’s footsteps working along with wife Brittany and their son Cooper Stuart. They are very active in the Younger Farmers & Ranchers  along with other local clubs. Nathan and Danielle live in San Jose and work in the Bay area. Meghan lives in Sonoma and teaches Kindergarten.

We are constantly raising the bar in our genetics to maintain and improve the quality of both our horned and polled Hereford bulls and females that our long time customers have come to expect from our program. Whether you are breeding straight Herefords or looking for that baldy cross to put more pounds on your commercial calves, we can fill that need. Our cattle are top quality and we breed for function. 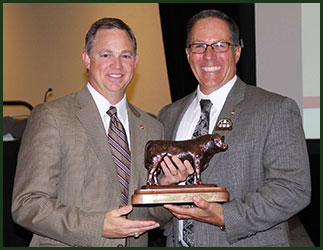